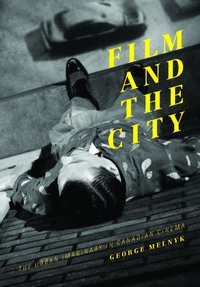 Most Canadians are city dwellers, a fact often unacknowledged by twentieth-century Canadian films, with their preference for themes of wilderness survival or rural life. Modernist Canadian films tend to support what film scholar Jim Leach calls “the nationalist-realist project,” a documentary style that emphasizes the exoticism and mythos of the land. Over the past several decades, however, the hegemony of Anglo-centrism has been challenged by francophone and First Nations perspectives and the character of cities altered by a continued influx of immigrants and the development of cities as economic and technological centers. No longer primarily defined through the lens of rural nostalgia, Canadian urban identity is instead polyphonic, diverse, constructed through multiple discourses and mediums, an exchange rather than a strict orientation. Taking on the urban as setting and subject, filmmakers are ideally poised to create and reflect multiple versions of a single city.

Examining fourteen Canadian films produced from 1989 to 2007, including Denys Arcand’s Jésus de Montréal (1989), Jean-Claude Lauzon’s Léolo (1992), Mina Shum’s Double Happiness (1994), Clément Virgo’s Rude (1995), and Guy Maddin’s My Winnipeg (2007), Film and the City is the first comprehensive study of Canadian film and “urbanity”—the totality of urban culture and life. Drawing on film and urban studies and building upon issues of identity formation in Canadian studies, Melnyk considers how filmmakers, films, and urban audiences experience, represent, and interpret urban spatiality, visuality, and orality. In this way, Film and the City argues that Canadian narrative film of the postmodern period has aided in articulating a new national identity.

George Melnyk is an Associate Professor of Canadian Studies and Film Studies in the Faculty of Communication and Culture at the University of Calgary. He is a historian of Canadian culture and has published numerous books in the field.