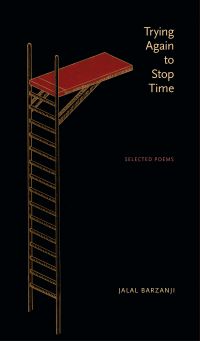 “It’s a losing battle:
my words have no chance against time.
Sometimes,
unable to catch up with imagination,
I leave the battle, candle in hand,
in complete darkness.”

— from “Trying Again to Stop Time"

Jalal Barzanji chronicles the path of exile and estrangement from his beloved native Kurdistan to his chosen home in Canada. His poems speak of the tension that exists between the place of one’s birth and an adoptive land, of that delicate dance that happens in the face of censorship and oppression. In defiance of Saddam Hussein’s call for sycophantic political verse, he turns to the natural world to reference a mournful state of loss, longing, alienation, and melancholy. Barzanji’s poetry is infused with the richness of the Middle East, but underlying it all is a close affinity to Western Modernists. In those moments where language and culture collide and co-operate, Barzanji carves out a strong voice of opposition to political oppression. Readers will return to his work again and again, just as viewers return to a favourite painting.

“Like contemporary poets Taslima Nasrin, Adonis, Yehuda Amichai, and Shuntaro Tanikawa, Barzanji’s is a voice in which the native willingly mutates into the global.”
— Sabah A. Salih, Translator

“The Kurdish question stands tall in our age as yet another emblematic paradigm of the violence enacted on a people in the name of the nation-state. Barzanji’s poetry is lovely, with frequent piercing tender moments and visions of the daily and the ordinary. The translation reads smoothly and naturally, highlighting the spoken quality of the poems, the loving and wounded quality of their speaker.”
— Fady Joudah, translator of Ghassan Zaqtan's Like a Straw Bird It Follows Me, and Other Poems, winner of the 2013 International Griffin Poetry Prize

Jalal Barzanji is a highly respected Kurdish poet and journalist. He has published seven books of poetry and numerous critical columns. After his two-year imprisonment by Saddam Hussein’s regime in the late 1980s and further political repression into the 1990s, Barzanji and his family fled to Turkey. They remained there for eleven months, eventually immigrating to Canada.