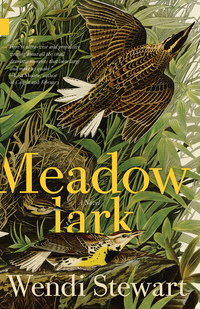 When her family’s car goes through the ice on Rainy Lake one cold March day in 1962, six-year-old Rebecca Archer is the only person her father is able to pull from the sinking vehicle. But as Rebecca grows up in a farmhouse haunted by the absence of her mother and baby brother, raised by a man left nearly paralyzed with grief, she wonders if her father really did save her after all.

Eventually, though, Rebecca finds solace in the company of her friends: Chuck, the sensitive son of a violently abusive father; and Lissie, an Aboriginal girl being raised alone by a perfectionist white mother. As these three young people protect and support one another, Rebecca discovers that by saving Chuck and Lissie, she may also save herself.

Wendi Stewart grew up on a farm in Northwestern Ontario and now makes her home in Wolfville, Nova Scotia. She has been published in The Antigonish Review, The Leaf, the Owen Sound Sun Times, and in Every Second Thursday (Glenmalure Publications). She currently has columns appearing in the Fort Frances Times and the Chronicle Herald. Meadowlark is her first novel.