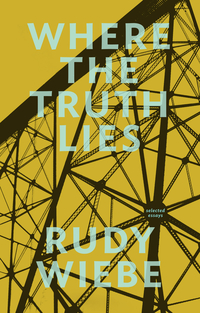 “The problem with writer longevity can be a complicating, even contradictory oeuvre. Hopefully.”

Where the Truth Lies collects forty years of essays and speeches that award-winning author Rudy Wiebe has crafted throughout his career. In this illuminating and wide-ranging selection, Wiebe provides a look behind the curtain, revealing his thought processes as he worked on many of his great books. Within this book, he dissects controversies that arose after publication of his early novels, meditates on words and their inherent power, explores the great Canadian North and the Canadian body politic, reckons with his family history and Mennonite faith, all while providing an engaging and enlightening commentary. Where The Truth Lies is a vital compilation of a writing life.

Rudy Wiebe was born in 1934 near Fairholme, Saskatchewan. Rudy has a B.A. in English and M.A. in Creative Writing, both from the University of Alberta. He studied under a Rotary International Fellowship at the University of Tubingen in West Germany, and in 1962 he received a Bachelor of Theology degree from the Mennonite Brethren Bible College. In 1962-1963 he was editor of the Mennonite Brethren Herald, a position that he resigned because of the controversy over his first novel, Peace Shall Destroy Many. From 1967 to 1992 he was Professor of Creative Writing and English at the University of Alberta. Wiebe has published twenty-five books, including nine novels and the non-fiction best-seller Stolen Life: The Journey of a Cree Woman, co-authored with Yvonne Johnson. He was awarded the Governor General's Award for fiction for The Temptations of Big Bear in 1973, and again in 1994 for A Discovery of Strangers. He is also the winner of the Lorne Pierce Gold Metal of the Royal Society of Canada for his contribution to Canadian literature (1987). Wiebe has served as chairman of both the Writer’s Guild of Alberta and the Writers’ Union of Canada. His book of essays, Playing Dead, was the first book in NeWest's Landmark Editions series. Wiebe lives in Edmonton, Alberta.