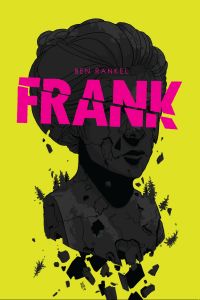 A historical mystery set in the tragedy of the Frank Slide, one of Canada’s deadliest natural disasters. Eve Lee is in a self-destructive spiral—her big plans for a new life in Frank have not at all turned out how she had planned. As Eve hits the bottom she’s forced to confront her expectations when her former lover disappears under questionable circumstances. But is there something sinister at play or is she simply being obsessive and self-centred? And will she be able to put her past behind her before she finds herself buried under it?

Most recently, Ben finished work on FRANK, his debut graphic novel published by Renegade Arts Entertainment, a historical murder mystery set in one of Canada’s deadliest natural disasters. It was released May 23, 2018.His comic work has also appeared in Avenue Magazine and at the Roq La Rue gallery in Seattle, Washington. His comic, illustration and design work on Sidney York’s 2015 album <3s (HEARTS) was nominated for a Western Canadian Music Award.He has also had a handful of short comics and pin-up art published through various comic book companies including Image Comics, IDW, Monkey Brain and Penny Farthing Press.Ben lives in Calgary, Alberta with his wife Fiona and their cat, Kupo.