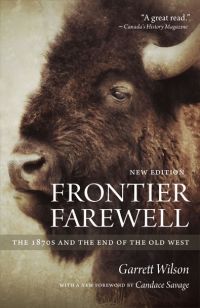 The return of a classic, with a new introduction by Candace Savage.

Frontier Farewell has been deemed "gracefully written" and "fully and meticulously researched," by Sharon Butala, while Canadian History Magazine called it "a great read that shatters the mythology surrounding the 'taming' of the West." A book every history buff should own, Frontier Farewell "ends with the disastrous bloodletting--the gruesome unwinding of a two-hudred year experiment," states Prairies North magazine.

"Frontier Farewell offers new perspectives on everything from the transfer of Rupert's Land to Canada, the Manitoba Resistance of 1869-70, and the Numbered Treaties of the 1870s, to the surveys of the Canadian Prairies, the coming of the North-West Mounted Police, and the fallout from the Battle of the Little Big Horn...You just might want to buy two copies--one for yourself, and one for a friend." -Ted Binnema, Department of History, University of Northern British Columbia

Garrett Wilson is a Regina lawyer turned bestselling author. His books include Diefenbaker for the Defence, Guilty Addictions, and Deny, Deny, Deny.