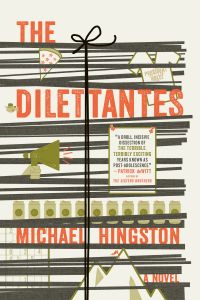 Alex Belmont is in his fourth and final year at Simon Fraser University. But instead of looking forward to a bright future, he's wondering what the hell he's going to do with a humanities degree. And he's thinking about girls. Why does he have such terrible luck with girls? And what's the point of writing for the school newspaper? No one even cares about the damn thing._x000D_
But when a conglomerate threatens the very existence of the school paper, Alex suddenly has a mission, a purpose: it's up to him and an unlikely group of fellow students to defeat their rival and save The Peak—whatever the cost._x000D_
Following in the great tradition of campus novels such as Lucky Jim and Mean Boy, The Dilettantes offers a deeply funny look at the quixotic world of academic life and student journalism in the 21st century.

Michael Hingston is the books columnist for the Edmonton Journal. His writing has also appeared in the National Post, Alberta Views magazine, and McSweeney's Internet Tendency. Born and raised in North Vancouver, Hingston now lives in Edmonton with his partner and two kids. The Dilettantes is his first novel.